Preparing students for the Primary Years Program Exhibition, a self directed and collaborative culminating project, has been a rewarding challenge this year. In a sense, I’ve been thinking of the entire school as a long term project with the Exhibition being the ‘deliverable’ product.

The process of developing capacities and competencies in my students has led to analysis and evaluation of Transdisciplinary Skills in the PYP.

I like the list of skills and the categories into which they are organized (thinking, social, research, self management, communication), and I have been developing a model for composite skills. These are skills that require fluency in other fundamental skills and attitudes.

[This post was initially titled Hybrid skills in the PYP. After further consideration, I realized that ‘composite’ was a better description than ‘hybrid’. Hybrid connotes that only parts of the fundamental skills are utilized, while ‘composite’ connotes that each skill is integrated in its entirety. I took the liberty of substituting the terms throughout the post.]

The first composite skill I conceived at the end of the last school year was Conversation. My reasoning was that conversation requires a combination of the Listening and Speaking communication skills together with the attitude of Empathy.

During the year, I have introduced a few other composite skills to our classroom toolbox, and am now in the process of organizing and codifying them in the MindMup below. If you would like to collaborate, the Composite skills mind map is shared via Google Drive. Use MindMup to open it and get started.

I have something to confess: I finally did it: Something I’ve been meaning to do for a long time, but haven’t mustered the courage until now: 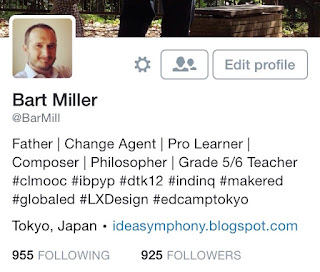 I was following over 900 people on Twitter. ‘How?’ you ask. I wasn’t really following anyone except the rare few whose tweets appeared on my feed in the odd moments I checked.

The more significant question is ‘why?’.

Twitter made me realise I was not alone. #teaching pic.twitter.com/YLLqB3unZH
— Jason Elsom (@JasonElsom) March 4, 2015

As described in my post Twitter misadventures and stumbling into connected learning, I started tweeting from the classroom in 2009. But it wasn’t until participating in the Learning Creative Learning and Making Learning Connected MOOCs in 2013 that my network and understanding empowered true connected learning.

Twitter is alive with Connectors. They utilize the platform for collaborative sensemaking. They begin conversations in tweets that extend to other platforms, media, and into the physical world. They share resources and blog posts liberally and constantly invite others into their learning experiences.
It’s true that Twitter is a convenient and simple platform for connecting with other teachers. Indeed, I consider many of my connections there as friends and anticipate someday meeting face to face.

However, when I was following over 900 people, I had no idea who most of them were. No doubt they are passionate connected educators like me, but how would I ever know if it was only by chance that I was able to read their posts or follow their links? Why was I following them, anyway?!?

And the simple answer is that I followed them because they followed me. I craved ‘followers’ and feared that they would unfollow me if I didn’t follow back.

The situation became worse when quasi celebrities and marketers began following me. How exciting it was to be ‘followed’ by someone with hundreds of thousands of ‘followers’!

Their tweets clogged my stream until it was obviously impossible to follow them at all. Every trip through the Twitterverse became cacophony. Unmanageable chaos reigned as motivational speakers mingled with online marketing ‘gurus’.
My family, friends, colleagues, and mentors were lost in the fray.

At the same time, I was reminded of the work of Adam Grant by the post and podcast, Adam Grant on Givers, Takers, Matchers and Fakers. Was I giving anything by following so many people on Twitter? I certainly wasn’t giving attention. By all accounts I was a matcher but that’s not want I want to be.

Promotors use social media to promote brands, products, and themselves. Everyone on Twitter is a promoter to some degree, but the more analysis I did, the more I recognized the patterns and strategies that are pure promotion.

The most glaring example of promotion on Twitter is done through hashtags. A Twitter user who always includes in their posts a hashtag related to a particular brand or product is a promoter.

Promoters study and strategize to mask their intent, for example by automating direct messages to new followers or retweeting, although I have observed that they almost always retweet from other promoters.


In years of Twittering, I have observed that all users can be located on a continuum with Connectors on one side and Promoters on the other. To explore this concept, I created the Twitter: Connectors v Promoters document embedded below to compare.
As a collaborative sensemaking activity, I invite you to add items based on your own experiences on Twitter.

All twitter users are at times more or less ‘connectors’ and ‘promoters’, and I don’t mean to imply judgment, rather analysis and reflection.

What Connectors consistently show, and Promoters desperately fake, is authenticity.

My situation demanded an authenticity check. My loved ones, collaborators, and mentors deserve my attention. I was surprised and bolstered in my mission by a tweet and post by William Chamberlain during my deliberations.

To foster community on social networks, I must participate as a community member. The graphic below from The six types of Twitter conversations by Pew Research Center provided models which helped me to understand the nature of my connections.

I didn’t want to continue my inauthentic participation in my ‘community’, but I also didn’t want to lose the connections I had made over the years. The solution was lists. I conducted a complete audit of my entire network and sorted everyone according to a system of lists that seems to work.

My first and smallest Twitter list is my PLCommunity. Members of this list are people with whom I regularly interact, who share stimulating and high quality content, and whom I trust to participate as community members when called to action. I follow all of them in my main feed and assume a level of responsibility for accepting their invitations and following up on their posts.

[2015.03.23 I decided to delete the PLCommunity list and simply consider the members of my PLNetwork whom I follow and with whom I regularly interact as my Personal/Professional Learning Community.]
Next is my PLNetwork. These are mostly educators around the world who share stimulating content and demonstrate commitment to connected learning, but whom I wouldn’t consider part of my community.
Finally, I sort all of my connected learning network into individuals and organizations by geography and created an Extended Global Network which contains almost everyone I have ever interacted with on Twitter.

My goal on Twitter is to be among those whom Harold Jarche would describe as Innovation Catalysts.

In my post, Don’t be a node. Be a nexus., I encourage myself and others to be active, independent, and dynamic in their online networks. For me, this starts from unfollowing hundreds of people so that I can give attention to my community.

To quote Sherry Turkle from The Flight From Conversation, ‘look up, look at one another, and let’s start the conversation.’