One of my challenges as an IB PYP teacher is how to design authentic opportunities for inquiry using mathematics. I think it’s due partly to the fact that the outcomes tend to be predetermined but also because upper elementary mathematical skills aren’t often prominent in the students’ own inquiries.

‘There is a place for predetermined outcomes, but these should be treated with a degree of suspicion,…’ Peter Moss #ibpyp #reggioplc
— Bart Miller (@BarMill) January 29, 2015

My solution has generally been to provide an inquiry provocation to introduce a concept with related skills to be practiced in subsequent lessons.

Recently, we completed a unit on estimation. The initial challenge was simply to estimate the number of various objects in various containers.

//platform.twitter.com/widgets.jsAfter my students discussed different strategies and submitted their estimates, we engaged the school community by setting up the jars and forms in the corridor and inviting other classes to join in. 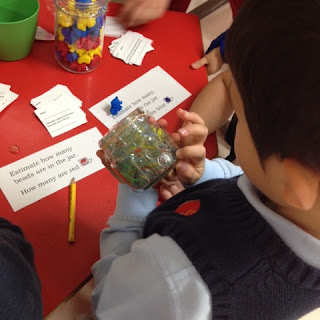 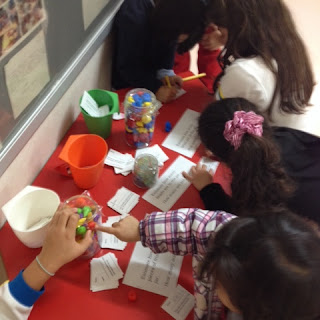 The added social element was invaluable. The observations my students made about the strategies employed by the younger students had particularly strong metacognitive value, as they stimulated us to reflect more deeply on our own approaches.
In reflection, this activity might have been better provoked by a question like ‘How do people estimate?’, providing students with more flexibility to inquire in different ways into the mathematical thinking of themselves and others.

Finally, to bring the inquiry to our target of using very large numbers, I challenged my students to formulate an estimation question that would result in a very large number. I’ll share two of the standout projects:
How many ants weigh the same as a ten year old girl?

The student who created this poster struggled mightily with her inquiry. I appreciated her creativity in first making a moving seesaw, especially because it was likely inspired by her participation in our school’s Maker Club. Considering her first guess of 100 ants being equal in weight to a child, it took a significant cognitive effort, a fair amount of peer support, and some careful teacher coaching to arrive at a more realistic estimate.
How much more ingredients would you need to make a classroom sized cupcake? 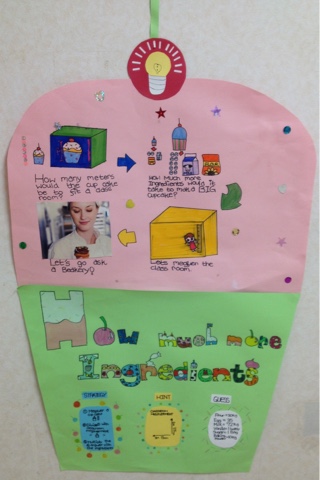 The giant cupcake was beautifully presented, but illustrates the importance of action in inquiry. This student’s work was hypothetically interesting, yet I don’t believe that any of the questions or ideas were actually pursued. When the idea was introduced, I was hoping that an abnormally large cupcake would appear in the classroom one day!

After creating posters to share their estimation inquiry processes, students embarked on a traditional unit of estimation practice and application in different situations. Their learning was certainly enhanced after completing their individual projects, and resulted in a clear connection between the academic and practical aspects of mathematics.

This was an interesting mini unit that resulted in meaningful learning, but I would like to explore ways to tie it to a greater and more general theme.

It also raises a question for me about the role of purposeful practice in inquiry learning. After all, learning outcomes are, by definition, predetermined. Is it enough to view them with suspicion when designing learning experiences, or should I actively try to eliminate them from my planning?